After the bell on Thursday, we received fiscal third quarter results from technology giant Apple (AAPL) for its June ending period. For the past few months, there has been a lot of uncertainty surrounding the name, as the coronavirus pandemic led management to withhold any formal guidance. While shares had rallied tremendously into this report, a blowout report combined with a stock split announcement sent the stock to a new high in after-hours trading.

So much for all of those worries about Apple revenues declining over the prior year period. As the table below shows, all five key revenue segments showed growth over their respective Q3 2019 results. Management was actually calling for a decent decline in iPhone revenues, so the increase of 1.7% was actually a pleasant surprise. All other segments showed double-digit increases, led by the iPad with over 31% growth and Mac approaching 22%. Perhaps the only disappointment here was the service segment, which only came in around or slightly below most analyst estimates. Dollar values below are in millions except per share amounts. 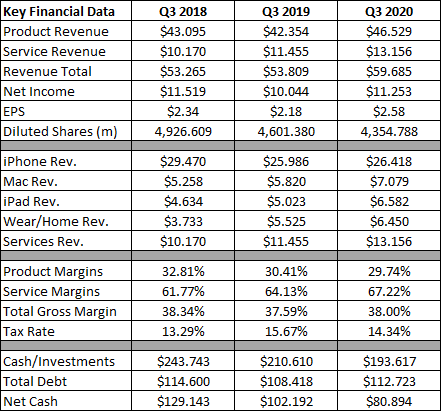 Service margins showed an impressive 309 basis-point rise, while product margins continued their downward trend. A blowout of more than $7 billion on the top line was obviously going to filter down to the income statement. The lower tax rate combined with the buyback certainly helped the EPS figure come in more than 50 cents ahead of the Street. Even with a number of analyst estimates rising in recent weeks, this report was one of the best we’ve ever seen from the company.

As mostly expected, Apple management did not provide any guidance for the September ending fiscal Q4 period. However, there was confirmation that the iPhone launch will be delayed a little, meaning no new phones available until early to mid October. I’m sure that analysts will be rushing to raise estimates considerably after this huge Q3 beat, but we could see a revenue/earnings miss next time around if expectations rise too much.

As we look towards the stock itself, management did slow down the buyback a little, only buying back about $16 billion worth of shares. I mentioned that possibility in my preview article, that the huge rally could cause some conservatism. The surprise here was that a four for one stock split was announced, which will again send the actual number of shares outstanding much higher, but Apple shares will then move down to about $100 or so based on current prices. Interestingly enough, that will actually cause Apple’s weight in the Dow Jones Industrial Average (“Dow 30”) to drop, since that index is based on share price.

Apple shares topped $400 in the after-hours session, setting a new all-time high in the process, and there will be a lot of analysts that don’t look good as a result. The stock went into this earnings report above the average price target on the Street, with many analysts having targets in the low to mid $300s. We are certainly going to see a lot of targets hiked after this report, and the stock split will likely lead to some more buying. While we will have to wait a little longer than usual for the next set of iPhone launches, Apple put to bed this week any fears that the business was really being hurt by the coronavirus.

Disclosure: I/we have no positions in any stocks mentioned, and no plans to initiate any positions within the next 72 hours. I wrote this article myself, and it expresses my own opinions. I am not receiving compensation for it (other than from Seeking Alpha). I have no business relationship with any company whose stock is mentioned in this article.

Additional disclosure: Investors are always reminded that before making any investment, you should do your own proper due diligence on any name directly or indirectly mentioned in this article. Investors should also consider seeking advice from a broker or financial adviser before making any investment decisions. Any material in this article should be considered general information, and not relied on as a formal investment recommendation.