As part of the big tech monopoly judicial hearing yesterday, the court has released many pages of documentation to support its claims against Apple’s alleged monopolistic App Store practices. One of these emails shines a light on Apple’s dealing with Amazon.

During the proceedings, Apple CEO Tim Cook said they treat every developer the same, but the details of the Amazon Prime Video deal seems to fly in the face of that …

The Amazon Prime Video app was one of the last big holdouts from joining the Apple TV. Apple would ultimately dedicate stage-time during WWDC 2017 to announce the Amazon partnership.

In an email between Jeff Bezos and Eddy Cue sent in late 2016, Cue refers to a previous meeting with the Amazon CEO and summarizes the agreement between the two companies. 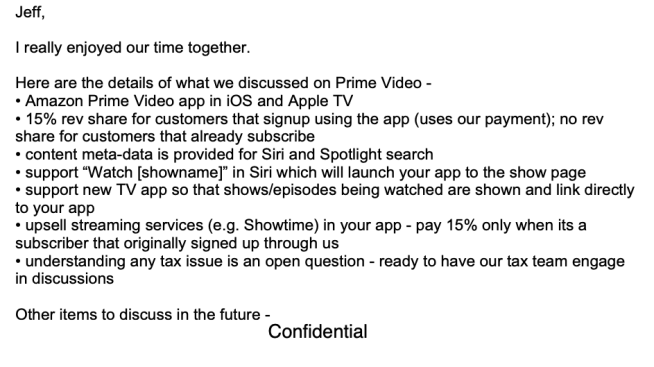 It seems very plain that Apple was arranging different financial terms with Amazon. Apple would receive 15% of revenue from subscriptions made through the app, and 15% share of third-party Amazon Channels sold through the app when the original subscriber used Apple payment processing.

The standard App Store arrangement for subscriptions is that Apple receives 30% of the money for the first year of a subscription. If the customer continues the subscription beyond a year, Apple’s cut drops to 15%. But the terms set out by Cue indicate Amazon was keeping 85% of the money from day one.

Earlier this year, Amazon’s special relationship with the App Store made headlines as Amazon began selling TV shows and movies through its iOS and tvOS app for the first time. Amazon was not required to use Apple In-App Purchase for these transactions if the user’s account was already associated with a credit card. In a statement at the time, Apple said this was part of an “established program” for qualifying entertainment video apps. However, Apple ultimately decides what apps can qualify, which is essentially another form of special deals.

The relationship between Apple and Amazon is not the only instance of Apple offering terms to companies that general developers cannot access. Plenty of high-profile App Store apps are granted special entitlements that are unavailable to smaller developers, such as relaxing sandboxing restrictions to enable Microsoft to bring the Office suite to the Mac App Store.

An app platform where truly everyone was treated the same is simply unrealistic. Of course, Apple will always have to try and accommodate the needs of the most popular apps on its devices with technical support, elevated App Review processes and the like. Apple should be truthful about that reality. Having Tim Cook say that everyone is treated equally when it is clearly not the case is not a good look.

This particularly stings when special financial deals leak out, like the email between Bezos and Cue. Meanwhile, the rank and file of the App Store, big companies and indie developers alike, have to sit on the sidelines and try and making a sustainable business where they are forced to give over 30% of their revenue to Apple.

Check out 9to5Mac on YouTube for more Apple news:

Google One will backup iOS or Android devices for free

Microsoft's Family Safety is now available on Android and iOS